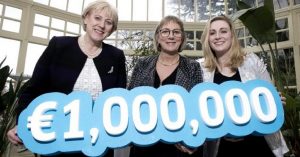 When Julie Sinnamon, CEO of Enterprise Ireland, recently launched a €1m Female Entrepreneurship Fund I was reminded of when I lectured at Dublin City University(DCU) in New Enterprise Development and Marketing Management.

The New Enterprise Development course had a fairly even split between male and female students, and the overriding memory I have of the female students is their limited aspirations as future entrepreneurs, even those who were very bright. The male students on the other hand had dreams of emulating great entrepreneurs, often regardless of ability. Obviously, this is a generalisation but I remember it as the prevailing attitude of both sexes.

Empirical evidence suggests that the quickest way for a person to acquire this self-belief is to observe someone they can identify with, achieving beyond their own aspirations. This triggers a response and they think “I could do that”. It’s part of the human psyche, ‘a picture paints a thousand words’, ‘monkey see, monkey do’, ‘example is better than precept’.

Unfortunately, I taught the New Enterprise Development course back in the 90’s when there were very few successful Irish female start-up entrepreneurs to highlight as examples or role models. Thankfully, this is no longer the case, with start-up entrepreneurs, such as, Nora Khaldi of Nuritas, Ciara Donlon of Theya Healthcare, Clare Hughes of CF Pharma,Sarah Bourke of Skytek, or Ciara Clancy of Beats Medical, and numerous others.

I should say that DCU and its Ryan Academy currently have excellent New Enterprise Development and Entrepreneurship programmes which have won the highest praise from industry and which also address issues and barriers specific to female entrepreneurship.

But the accolades must go to Enterprise Ireland (EI), under the leadership of Julie Sinnamon, for its impressive impact on Irish female entrepreneurship over the past 10 years. In 2011 only 7% of EI’s high potential start-ups were female led; today it is a remarkable 35%. EI however is not content to rest on its laurels and has stated ambitions of achieving 50%, sooner rather than later.

BARRIERS: “In trying to increase the number of female-owned high potential start-ups, we basically boiled it down to three key things: 1) confidence/self-belief; 2) lack of role models; and 3) access to finance.” (Julie Sinnamon 2018).

Confidence and lack of role models are certainly barriers to females starting businesses, the latter being objective and the former subjective. And it is generally accepted that the subjective element lies at the core of entrepreneurial start-ups because, if you don’t believe in your ability to succeed you won’t (and probably shouldn’t) start a business.Of course, self-belief alone doesn’t guarantee success and there are many delusional people, male and female, who have started and failed as entrepreneurs, but it is nonetheless the essential ingredient for entrepreneurial start-ups.

Access to finance is also a barrier for female entrepreneurs but it relates to much more than physical access to bankers or venture capitalists (VC). Real access requires the bankers and VC’s to be gender blind when assessing the credibility of the business proposer. It is worth noting that just 7% of general partners in VC firms worldwide are women and at times VC firms have shown overt bias against female led start-ups.

However, Nicola McClafferty of VC Draper Esprit’s believes; “There is a real will to bring more female VCs into the industry. It’s a small step and these things don’t change overnight [but things are changing].” I suspect, (given that bankers and VC’s are profits driven, and profits are gender blind) changing male mind-sets and getting real access to capital for female led start-ups won’t be an insurmountable task. Especially, with the growing number of female CEO appointments, such as; Julie Sinnamon, and Francesca McDonagh of Bank of Ireland, or VC’s like Nicola McClafferty, among others.

It is, however, easy to forget that these women, and their like, are at the forefront of social change and that, historically, it is not long since female senior managers and entrepreneurs were the rarest oddity. In 1973, for example, not only were female managers an oddity but women in the Civil Service, Health Boards, and Local Authorities actually had to end their careers when they got married. This was a time when the average age of brides was 24 years, about the same age of today’s females who are leaving college and starting their careers.

My own first experience of dealing with a successful female entrepreneur was in the 90’s, before I lectured at DCU, I was Marketing Manager with a clothing manufacturer and had to negotiate prices with Margaret Heffernan of Dunnes Stores. It wasn’t exactly a baptism of fire for me but I quickly realised that being an Alpha in business is not gender specific!

However, I didn’t have dealings with successful start-up female entrepreneurs until I setup a company in China, where I found an unexpected level of gender equality. Surprisingly, for me at least, China has a very impressive record of female entrepreneurship. Of the top 56 richest self-made women in the world 26 are Chinese and over 50% of China’s post graduate business students are female.

I developed good relationships with my Chinese colleagues and business associates, counting some of them as personal friends, and being a culturally curious person I often asked, both females and males, “what do you believe in?” The answer was invariably “I believe in myself” and this never ceased to impress me or make me wonder if it was China’s real competitive advantage.

My friends and colleagues were always amused at my curiosity and at how profound I thought their answers were but I remember thinking this is exactly what my female entrepreneurship students lacked, self-belief/confidence. It is a powerful force and if Enterprise Ireland can generate it among our budding female entrepreneurs it will be testament to EI’s contribution to Ireland’s economic development, gender equality, and social change.

Investing in female entrepreneurs is not only the right thing to do it is also the economically smart thing to do because it releases the underutilised potential of a huge resource that will help quicken the pace of economic development for all.