HOW TO MINIMISE THE BREXIT GAMBLE 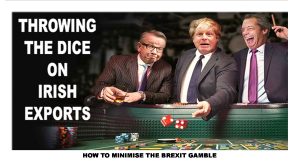 The other day I had a coffee with the marketing director of a long established Irish food exporter. We were chatting about Brexit and the decline in the value of Sterling and I was astonished when he said; “Ah, we’ve been here before, things will work out.”

He was referring to the last big fall in the value of Sterling, in the 00’s, and how his company had weathered that storm with flying colours. At that time, the impact on their margins had been lessened by a combination of; 1) increased productivity and 2) an agreement where their buyers (supermarkets) would temporarily absorb some of the increased costs and also pass some onto the consumer. Basically, everyone held their breath and the pain was shared while waiting on Sterling to bounce back, which it duly did.

But unfortunately what is happening to Sterling now is structural and long-term, whereas then it was cyclical and short-term. And while no one can say with any real certainty if the Brexit gamble is going to be a soft regulatory alignment or a hard crash-out with WTO rules, we can say with some certainty that the British economy will be sluggish for the next decade.

It seems highly unlikely Sterling is going to strengthen and far more likely that it will continue to slide, with serious long term consequences for Irish exporters, particularly food exporters. Bord Bia estimate that for every 1% weakening in Sterling there is a 1% (0.7%) decrease in Irish exports to the UK and that at an exchange of 88p food exports actually begin to fall.

I suggested to my coffee pal that his company’s approach in the 00’s won’t have the same impact today, because this time around:

He said it had taken his company 25 years to win its position in the UK market and that it was very good at what it did. I wasn’t however questioning his company’s past performance; it had, without doubt, developed sustainable competitive advantages and had positioned the company and brand in a place that matched its resources with the requirements of the market, while at the same time fending off the other competitive forces.

But I suggested that; 1) the structure and competitive forces in the market are changing, 2) their competitive advantages may no longer be sustainable or even relevant, 3) their market position may become counterproductive, 4) the entire value created by the consumer was tightening, and 5) their position in the home market would also be challenged with cheaper imports.

I emphasised that they needed to at least consider the most likely competitive scenarios and to be ready to implement alternative strategic plans if required. I told him, ‘when our biggest trading partner is throwing the dice with our future it is no time to be complacent’.

We finished our coffee and I was happy to schedule a meeting with his CEO, to have a more structured chat on their company’s strategic direction and competitive strategy.

When we meet I’ll emphasise that it is never all doom and gloom, ‘where there is change there is opportunity’ and you can be sure that the companies with calculated strategic planning options are the ones most likely to succeed in times of major change, such as Brexit.