WHY BREXIT IS HAPPENING 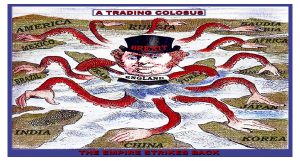 Recently I happened to be waiting for a colleague outside the British Parliament when three people carrying placards approached. The placards read:BRITANNIA GREATEST TRADING NATION: BREXIT MAKING BRITAIN GREAT AGAIN: and WE’RE TAKING OUR COUNTRY BACK. When they passed, to wherever they were going, the messages reverberated in my head and I felt I had just witnessed a microcosm of the Brexit conundrum and maybe a window to understanding it. Let me explain.

Brexiteers believe that the rules and regulations of the EU are stopping Britain from being that ‘GREATEST of TRADING NATIONS’. They want to negotiate independent trade deals with the likes of China, unfettered by EU regulations. Yet Germany, for example, currently exports 4 times more to China than does Britain, under the exact same regulations. This would indicate a mismatch between British supply and Chinese demand, or perhaps problems in British competitiveness, or productivity, or marketing, but it does not necessarily indicate a problem with trade regulations.

Brexiteers want to ‘MAKE BRITAIN GREAT AGAIN’. They hanker after the days when British commercial achievements were without equal, when its merchant navy was omnipresent on trade routes, when the value of its international trade was greater than the world had ever seen. But this commercial greatness was not founded on free trade, or commercial acumen, or fair competition, it was founded on military might, conquest, colonisation, exploitation, and hugely regulated trade practices between Britain and its colonies. This type of trading Greatness is no longer achievable and so hankering after it indicates that Brexiteers have economic aspirations but lack commercial understanding.

Brexiteers say they are; ‘TAKING OUR COUNTRY BACK’. On seeing this placard two questions sprung to mind; 1) back from what, or 2) back to where. Does the message mean, take Britain back from being a key member of the biggest, and closest, market in the world? So that Britain can try to open new trade deals with smaller, more disparate, less developed markets that are scattered thousands of miles away. Or does it mean, take Britain back to a time when it traded without the leverage of military might? Perhaps to a time before colonisation and empire, say, for example, to the early 1700’s when 80% of its exports went to Europe, its nearest and most accessible market.

One does not have to be an economist or business strategist to understand that the first considerations when negotiating new business relate to the following: market size, market structure, market proximity, market accessibility, tariffs and quotas, customs administration, invisible barriers, reliable banking and legal structures, accepted commercial practices, quality standards and regulations, cultural proximity, customs and traditions, shared history, common language, labour practices and regulations, to name but a few.

These are fundamental considerations and must be dealt with before businesses can begin negotiating; price, promotion, payment terms, order minimums, production capacity, product specification, packaging, quality control, quality inspections, delivery times, logistics, and so on.

Given the complexities and the number of variables to be considered in doing repeat-business or opening new-business, common sense would indicate that, on balance, British Business must find it easier to do business in the EU than in; China, India, Russia, Brazil or other smaller far flung markets.

This simple and brief rebuff of the messages on the three placards suggests that, despite the rhetoric and posturing of the Brexiteers, the Brexit thesis lacks commercial reasoning, which brings me to the fourth and overarching message. The placard carriers were very ordinary, nondescript, middle England people but I sensed a steeliness about them, a determination to be heard wherever they were heading. They even had a lemming like aura, an inherent need to soldier on, regardless of reason or consequences and, surprisingly, this made me feel a little sorry for them.

I felt that their raison d’être was rooted in emotions rather than in reason. And I was struck by their; loss of identity, inability to let go of the past, denial of glaring weaknesses, insecurity about the future, and their sense of entitlement to be ‘Great’. Again surprisingly, I actually empathised with them and saw Britain as the underdog, struggling against the odds. This is a very strange feeling for an Irishman given that Ireland’s development was bludgeoned by British conquest and restrictive trade practices for nearly 800 years. No doubt my ancestors turned in their graves on feeling my empathy.

Why did the British embark on Brexit, perhaps we’ll never really know? The above explanation is no more than a superficial view, a Brexit snapshot, as I stood outside the British Parliament and observed history in the making. But we do know that Britain is leaving the EU in little more than twelve months and that this will have economic and political consequences for itself and the remaining 27 member countries, particularly for Ireland. And we know that Brexit is a huge historical, probably irrational, step for Britain, into unchartered commercial waters. Let’s hope it is not a calamitous step, if only for self-interest.

If you are an Irish business trading in goods or services that wholly or partly; originated in, are destined for, or have to travel through, the UK market you need to seriously consider how Brexit will impact your business.